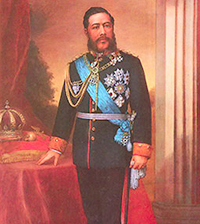 The Friends of Iolani Palace along with the Royal Guard of the Hawaii Air National Guard will celebrate King Kalakaua’s 182nd birthday with a day of festivities. Inspired by the styles and colors of the King’s Birthday Jubilee in 1886, the celebration will feature live entertainment by the Royal Hawaiian Band, Monarchy era bunting and décor, and special birthday tributes.

This is a FREE event open to the public.

Make sure to copy Registration number after successful submission.

Thank you for payment.

Your ticket for the: King Kalakaua’s 182nd Birthday Celebration