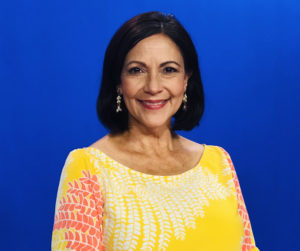 HONOLULU (May 16, 2019) – Following an extensive local and national search, The Friends of Iolani Palace today announced that the Board of Directors has selected Paula Akana as its new Executive Director, effective July 8, 2019.

“As a well-respected journalist and community leader, Paula brings with her a deep love of Hawaii, our history, and our culture, and will be instrumental in helping us continue to promote our mission and share the stories of our monarchy and the Palace, here in Hawaii and around the world,” said Lissa Guild Eveleth, president of the Board of Directors of the Friends of Iolani Palace.

As a veteran broadcast journalist, Akana brings more than 30 years of communications and leadership experience to her new role. Over her distinguished career with KITV Island News, she has covered a variety of stories about Iolani Palace, including its restoration, return of long-lost objects, and unique place in Hawaii’s history.

“I am humbled and honored to be asked to help lead the Friends of Iolani Palace. The Palace has always held a special place in my heart,” said Akana. “I want to mahalo KITV for allowing me to share stories of the Palace and our Hawaiian culture for the past 35 years. I now look forward to not only sharing the Palace’s story with the world, but also, along with the board, staff and volunteers, to continue to restore and protect this wahi pana.”

“The diligence, passion and grace that Paula has brought to her job each and every day for the last 30 plus years is rare and special,” said Jason Hagiwara, general manager of KITV. “While we will miss her, we are excited for her and wish her well in the next chapter of her journey.”

Akana is a graduate of Kamehameha Schools and received her Bachelor of Arts degree in journalism with a minor in Hawaiian anthropology and archeology from the University of Hawaii at Manoa. She is involved with a number of local nonprofit organizations including the Board of Directors for YMCA Metro Honolulu and Ma‘o Farms and is a member of the Hawaiian Civil Club of Honolulu. Akana has also been volunteering with the Polynesian Voyaging Society for more than 30 years and has worked on education initiatives, voyaging planning, and fundraising efforts.

Akana succeeds Kippen de Alba Chu, who departed the organization at the end of January after more than 12 years.

About Iolani Palace
Built in 1882 by King Kalakaua, Iolani Palace was the home of Hawaii’s last reigning monarchs and served as the official royal residence and social life until the overthrow of the monarchy in 1893. A registered National Historic Landmark, Iolani Palace is a living restoration of a proud Hawaiian national identity and the only official royal palace in the United States. For more information, please call Iolani Palace at (808) 522-0822 or visit www.iolanipalace.org.

Your ticket for the: PAULA AKANA NAMED NEW EXECUTIVE DIRECTOR OF IOLANI PALACE