From a small classroom in Iowa to the shores of Ireland, Palace relics have been found throughout the world. Learn more about the search for these treasured items and successful efforts to return them to Honolulu from the stories below:

A pair of cuff buttons or cuff links, once in the collection of Queen Liliuokalani, was recently donated to The Friends of ‘Iolani Palace by Jean Starks of New Jersey. These cuff buttons were acquired over eight decades ago by her father, W. Mack Angas. He bought them at an auction of the queen’s personal belongings here in Honolulu.

When Queen Liliuokalani died in 1917, it was her wish that her personal property be sold. The proceeds from the sale were to be added to a trust fund for the establishment and maintenance of an orphanage. An inventory was taken of her personal property deposited in the vault of Bishop Trust Company. Along with the diamond brooches, tiger claw jewelry, silverware, and rare Hawaiian feather lei, the inventory listed "1 Pair Cuff Buttons set with Woman’s Face." The value noted was $2.00.

In fulfillment of the queen’s wishes, the cuff buttons and other items were removed from the vault at Bishop Trust Company and put up for public auction in 1924. Potential buyers previewed the goods at the firm of Wall & Dougherty on Bishop Street. Actual bidding took place in the ballroom of the Alexander Young Hotel.

One of the persons attending the auction was Lieutenant W. Mack Angas (CEC) of the U.S. Navy. He was on his second tour of duty in the islands, and was assigned to the Public Works Department at the Pearl Harbor Navy Yard. His daughter Jean Starks related how the cuff buttons came into her father’s possession: "My father went to the auction in the morning and everything was too expensive for a lieutenant in the navy with three children. He just dropped by in the afternoon on a hunch something might come up that he could afford. And there were the cuff links which he thought were more attractive than some of the more expensive items sold in the morning. So he bought them."

Mrs. Starks mentioned that her father had the cuff buttons monogrammed with the initial "A" for "Angas" before presenting them to her mother as a gift. They remained one of her mother’s treasured possessions as the family moved to different naval bases in California, Florida, New York, Massachusetts, and South Carolina. The family eventually settled in New Jersey. After retiring with the rank of vice admiral, W. Mack Angas became Chairman of the Department of Civil Engineering at Princeton University. The department’s most prestigious award, given to the top graduating student, is named in his honor.

Upon the death of her mother, Mrs. Starks was given the cuff buttons by her father because she was born in Hawai‘i. After enjoying them for many years, Mrs. Starks felt it was time to return these cuff buttons to Hawai‘i. In returning them, Mrs. Starks remarked: "You can see that they have been treasured. Neither my mother nor I ever forgot where they came from.

This magnificent calabash and stand was commissioned by the Nihoa Society in 1886 as a gift for King Kalakaua. The Nihoa Society was composed of members of a scientific expedition that ventured to the island of that name in 1885. Princess Liliuokalani was a member of that expedition.

Crafted by Honolulu cabinetmaker Johann Heinrich Wicke, this presentation calabash is made from native kou wood. A decorative crown adorns the top of its lid, while the name Nihoa is carved into its body. It is mounted on a turned wooden pedestal with carved base, and rests upon an elaborately-styled stand composed of koa and kou wood.

After King Kalakaua died in 1891, Queen Dowager Kapiolani presented this calabash and stand to Rear Admiral George Brown of the United States Navy. As commander of the U.S. flagship Charleston, the Admiral had placed his ship at the King's disposal for his journey to California in November of 1890. When the King died in San Francisco just two months later, Admiral Brown had the solemn duty of returning the King's remains to Hawaii.

The U.S.F.S. Charleston remained in Honolulu during funeral observances for Kalakaua. The Admiral, his officers, and a detachment of Marines and Blue Jackets from the U.S.F.S. Charleston marched in the funeral procession that took the late King's body from Iolani Palace to the Royal Mausoleum.

As Admiral Brown and his ship prepared to return to San Francisco following the funeral, a hookupu was held for Admiral Brown. This ancient Hawaiian custom paid homage to an honored personage through the presentation of gifts. The people of Hawaii wished to show their appreciation to the Admiral, for the kindness and consideration he had demonstrated towards their late King.

Thousands of people came to Brewer's Wharf bearing gifts. They included Cabinet Ministers, Supreme Court Justices, Government officials, and ordinary men and women throughout the Kingdom. F. W. Bartlett, who witnessed the event, recalled: "Some of the natives were very old and were hardly able to stumble along the wharf, but each brought something, some only one egg or nothing but a few flowers, but the desire was there and all came with their widow's mite or their large gift, all with the same attitude of respect and gratitude."

Besides the Nihoa calabash and stand, Queen Dowager Kapiolani presented Admiral Brown with a diamond ring and ebony parlor stand which had belonged to King Kalakaua, as well as provisions for the Admiral's journey.

More than just an example of expert craftsmanship, the Nihoa calabash is symbolic of the affection that a people held for their King; and the gratitude and respect that a Hawaiian Queen and nation had for an American Admiral.

The search for the Nihoa calabash began in 1983. With only the name of Rear Admiral George Brown as a clue, acquisitions researchers Ena Sroat and Mary Marx began an extensive search to find any living descendants of the Admiral. After a seven-year search, contact was finally made in 1989 with one of Admiral Brown's descendants. Thomas T. Beattie, Jr., a great-grandson of the Admiral, had the Nihoa calabash in his possession. He assured Palace researchers then that the calabash would come to Iolani Palace after his death. However, a recent letter from acquisitions researcher Pattie Black resulted in the unexpected news that Mr. Beattie was now willing to part with the calabash and its accompanying stand. They were received, along with a niho palaoa and kukui nut necklace given to Admiral Brown, just in time for this year's commemoration of King Kalakaua's birthday.

The return of these objects is a testament not only to the generosity of its donor, but also the diligence by which acquisitions researchers pursue the worldwide recovery of original Palace artifacts. 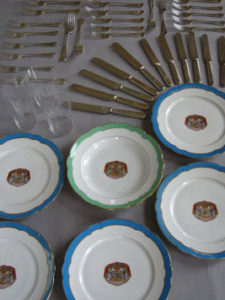 One of the largest acquisitions of Palace objects in recent memory arrived in March of 2009 from Thomas S. Morgan of Los Altos, California. His donation included a total of forty-one pieces of silver, china, and glassware that once graced King Kalakaua's table. There were four blue-bordered plates and a green-bordered soup plate bearing the Hawaiian Coat of Arms made by CHs. Pillivuyt & Cie. of Paris; three glasses of various heights sporting a stipple and crown design; and seven dinner forks, fifteen salad forks, five dinner knives, and six butter knives. These last items, with two engraved facing "K" surmounted by a crown on the handles, were part of a set in silver plate manufactured by Walker & Hall of Sheffield, England.

Born in Honolulu, Thomas Morgan is a member of a kamaaina family that originally arrived in the islands during the 1850's. He received his early education at Hanahauoli and Punahou School. His grandfather, James Francis Morgan, Sr., was an auctioneer who participated in the original auctions of Palace articles after the end of the Hawaiian Monarchy in 1893. Some of the Palace articles acquired by his grandfather were passed to his father, William Lionel Morgan, in whose memory these items are now given. Mr. Morgan remarked that because of his age, he chose to make the donation at this time. He states, "I feel that it is important to know that the artifacts have returned to their ‘home' where they will be preserved for the future and best appreciated by the many visitors to Iolani Palace. I encourage others who have similar items in their possession, or who know where such artifacts exist, to please return them or notify Iolani Palace." Palace personnel is extremely grateful for Mr. Morgan's generosity and hopes that others will follow his lead in bringing objects back to Iolani Palace for the enjoyment of all.

The Friends of Iolani Palace is conducting a worldwide search for artifacts and furnishings that were once part of the royal collections.

Many Palace artifacts remain in storage because of a lack of available conservation funds for repair and restoration. Through this unique program, any interested individual or organization may sponsor the restoration of a specific object in the Palace collection.

Your ticket for the: Success Stories