Following the overthrow of the monarchy, Iolani Palace became the government headquarters for the Provisional Government. Following the death of Kalakaua and later the overthrow, many of the palace’s original furnishings were sold at public auction and personal belongings were returned to the royal family. In the decades that followed, the Palace served as the government capitol building for the Republic, Territory, and eventually, the State of Hawaii. 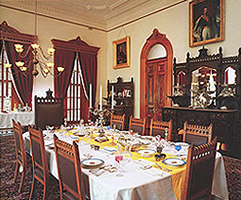 Government offices vacated the Palace in 1969 and moved to the current State Capitol building. After nearly 80 years as a government building, the once regal palace was in need renovations to restore it back to its once regal glory.

In preparation for restoration, the Junior League of Honolulu conducted an extensive historical research project. Researchers uncovered clues about construction, furnishings, and palace lifestyle in nineteenth-century newspapers, photographs and manuscripts found in various archives and libraries. 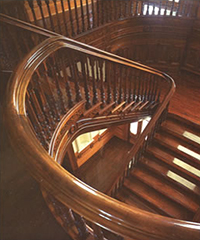 Conservation treatment and painstaking reproduction of original fabrics and finishes has resulted in the restoration of Palace rooms to their monarchy era appearance. Many original Palace objects sold and dispersed at public auction have been recovered from different parts of the world – glassware found in Australia, and a table in the Governor’s mansion in Iowa, to a chair in a local thrift store. The quest to find original Palace furnishings and artifacts continues.

Your ticket for the: Restoration Of The Palace