HONOLULU (July 20, 2020) – The Friends of Iolani Palace received a $50,000 donation from ‘IOLANI, Inc. and the Kawakami Family from proceeds of a limited-edition face mask print.

“We were completely amazed by the response to our limited-edition ‘IOLANI face masks, selling out in less than 24 hours,” said Alx Kawakami, ‘IOLANI Director of Development and third generation of the family-run business. “With the community’s support, we were able to raise four times our original goal of $10,000. Our family also committed to matching the first $10,000 for a total donation of $50,000.”

Iolani Palace reopened its doors on June 19 after nearly three months of closure due to the COVID-19 pandemic. The Palace lost more than $600,000 in revenue from tours and shop sales during that time, while continuing to incur expenses in order to properly protect and preserve the historic landmarks and its contents. 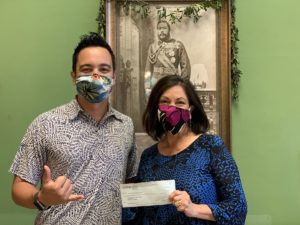 PHOTO CAPTION
‘IOLANI, Inc. presented The Friends of Iolani Palace a total of $50,000 from proceeds of its limited-edition ‘IOLANI print face masks and a matching donation from the Kawakami Family.

Pictured from Left to Right: Alx Kawakami, ‘IOLANI Director of Development, and Paula Akana, Executive Director of The Friends of Iolani Palace.

About Iolani Palace
Iolani Palace is the only official residence of royalty in the United States. King Kalakaua was the first reigning monarch to travel around the world and built Iolani Palace in 1882 to enhance the prestige of Hawaii overseas and to mark Hawaii’s status as a modern nation. For more information, please call Iolani Palace at (808) 522-0822 or visit www.iolanipalace.org.

About `IOLANI, INC.
In 1953, `IOLANI began with a dream and determination by founders Keiji and Edith Kawakami. The original shop had its modest beginnings inside a small space with a dirt floor that overlooked `Iolani Palace – hence, the name. Years later, the factory relocated to its current location in Kaka`ako, and by 2010, opened its first retail store. Now in their 67th year, what started with Aloha shirts for men has now expanded to include women’s and children’s lines, accessories, and more.

Your ticket for the: IOLANI PALACE RECEIVES $50,000 FROM ‘IOLANI, INC. FACE MASKS SALES