HONOLULU (NOV. 17, 2021) – Reproductions of the suit King Kalakaua wore at his coronation on February 12, 1883, and his masonic apron debuted at Iolani Palace on the king’s 185th birthday, Tuesday, November 16, 2021. Created by historic dress designer Iris Viacrusis, the Coronation Suit stands majestically in the Throne Room, while the Masonic Apron is on display in King’s Library on the second floor. 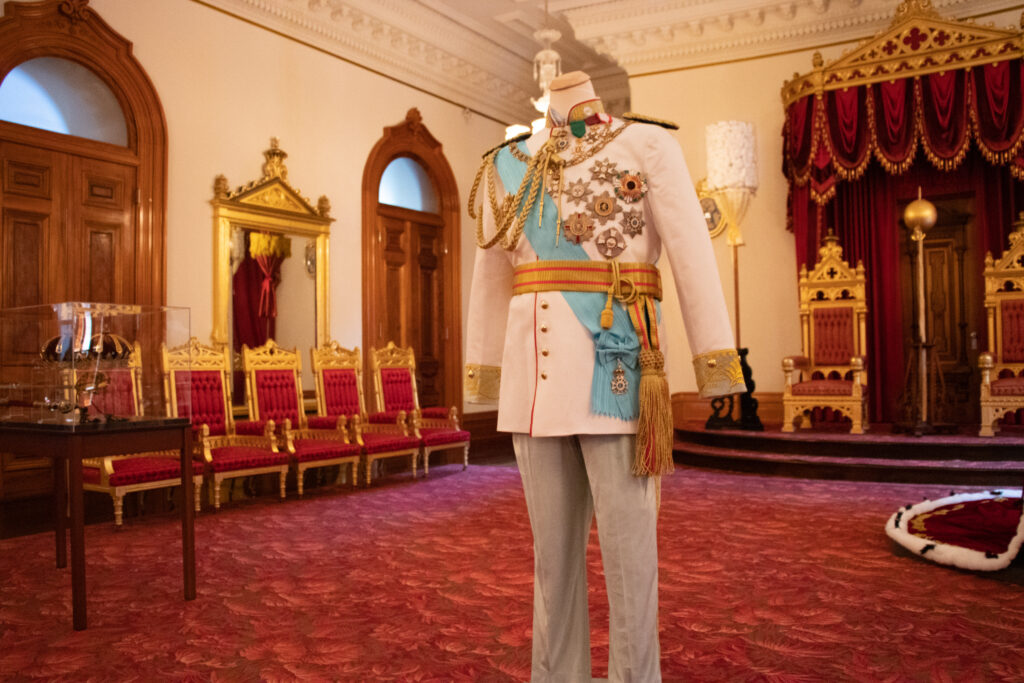 “It’s a fitting tribute to introduce King Kalakaua’s Coronation Suit and Masonic Apron on his birthday, just as we dress Iolani Palace each year to commemorate his 50th Jubilee,” said Paula Akana, Executive Director of The Friends of Iolani Palace. “While the originals have been lost to time, through the talents of Iris Viacrusis we are able to enrich the stories shared with guests with these garments that have been meticulously recreated with incredible historic accuracy.”

The two garments are the latest from the Palace’s Alii Garment Reproduction Project. Viacrusis also created the four other garments in the collection, which include Queen Kapiolani’s lei hulu and peacock gather gowns and Queen Liliuokalani’s ostrich feather gown and ribbon gown, shown in her official portrait in the Blue Room. Native Hawaiian designer and Project Runway alum Kini Zamora re-created Kapiolani’s Coronation Gown in 2019.

“Though King Kalakaua was inspired by Western and European fashion, he incorporated Native Hawaiian elements creating a style that was unique to our monarchs,” said Viacrusis. “Throughout history, fashion has been a form of expression that everyone can relate to. Bringing these pieces to life allows a new generation to connect with Hawaii’s royal past in a tangible way. It’s an honor to help bridge the gap between past and present.

Viacrusis studied Edwardian and Victorian fashion in Paris and has historic costumes for the Merrie Monarch court. He conducted extensive research of historical documents and photos, as well as similar Victorian-era attire to recreate the detail in the original garments.

About Iolani Palace:
Iolani Palace is the only official residence of royalty in the United States. King Kalakaua was the first reigning monarch to travel around the world and built Iolani Palace in 1882 to enhance the prestige of Hawaii overseas and to mark Hawaii’s status as a modern nation. For more information, please call Iolani Palace at (808) 522-0822 or visit www.iolanipalace.org.

Your ticket for the: IOLANI PALACE DEBUTS REPRODUCTIONS OF KING KALAKAUA’ CORONATION SUIT AND MASONIC APRON