Limited-edition piece inspired by the Prince’s Own helmet plate 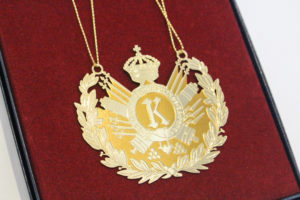 HONOLULU (November 26, 2019) – Iolani Palace has unveiled its 2019 Palace Ornament, inspired by a helmet plate belonging to the Prince’s Own, a uniformed volunteer artillery unit of the Hawaiian Kingdom with roots dating back to 1857. The stunning, limited-edition ornament is now available for purchase at the Palace Shops.

This year’s ornament celebrates the recent donation of a helmet plate that is now in the Palace Collections. The ornamental design is typically located on the front of a helmet designates the wearer’s nationality and organization, and is commonly used among military and police forces.

As depicted in the ornament, the bronze helmet plate bears the letter “K” for King Kalakaua and is inscribed with the Hawaiian national motto: Ua Mau ke Ea o ka Aina i ka Pono, or “the life of the land is perpetuated in righteousness.” The design also features garland as well as cannons and cannon balls.

The helmet plate was donated to The Friends of Iolani Palace earlier this year by The Helen Ladd Thompson Revocable Living Trust. The family are descendants of Anton Rosa, who served in numerous governmental positions and most notably as Attorney General for King Kalakaua.

The 2019 Palace Ornament retails for $25 and is now available for purchase at the Palace and Gallery Shops. For more information, call (808) 532-1050 or email shops@iolanipalace.org.

Iolani Palace is the only official residence of royalty in the United States. King Kalakaua was the first reigning monarch to travel around the world and built Iolani Palace in 1882 to enhance the prestige of Hawaii overseas and to mark Hawaii’s status as a modern nation. For more information, please call Iolani Palace at (808) 522-0822 or visit www.iolanipalace.org.

Your ticket for the: 2019 IOLANI PALACE ORNAMENT NOW AVAILABLE